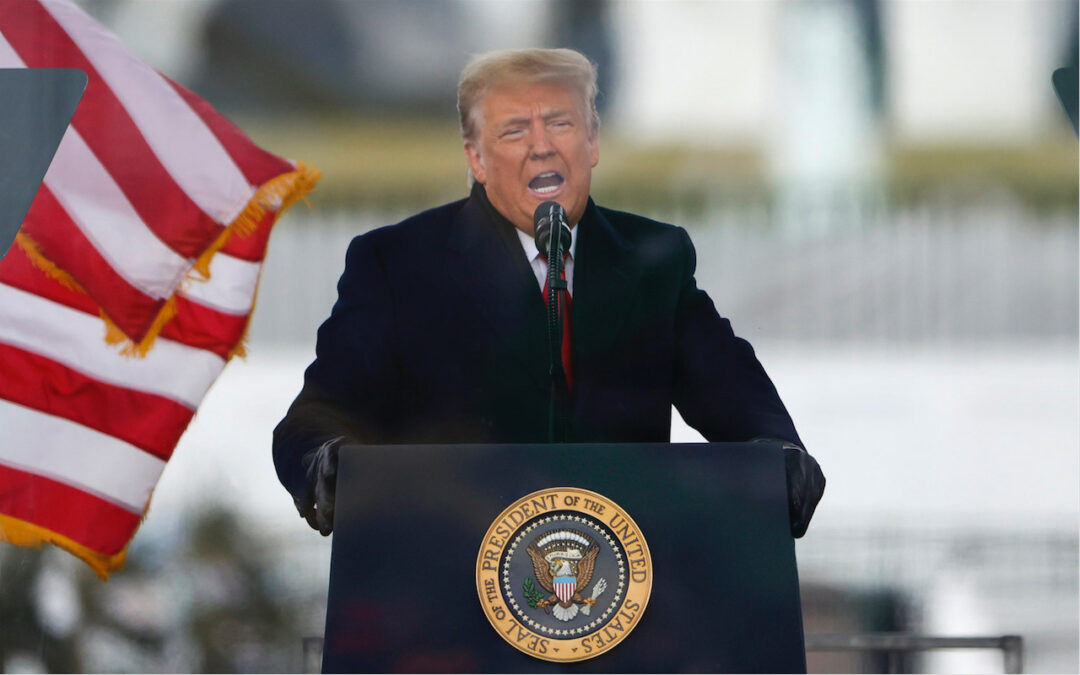 Here’s what the US constitution states about convicting a president after he leaves office.

In examining the statutes for murder in America it seems clear that Donald Trump caused death by willfully distracting the American public by downplaying the pandemic, while admitting he knew it was much deadlier than the flu.

But his supporters say this is just protected political speech. Let’s look at the definition of murder though, and remember that according the the US Constitution no one is above the law, not even the president.

This begs the question, could there be a class action lawsuit against Donald J. Trump for ignoring his responsibility to protect the American people by putting his own agenda before that or the people?

The FBI states that Criminal homicide―a.) Murder and nonnegligent manslaughter: the willful (nonnegligent) killing of one human being by another. On Feb 7 2020 Trump Stated “It’s also more deadly than even your strenuous flus.” On Feb 26, 2020 Trump directly contradicted his prior statement with obvious full knowledge saying: “This is a flu. This is like a flu”.

The evidence clearly implicates Donald J. Trump, in accordance with the predicates of §1111 for First Degree Murder in “the unlawful killing of a human being with malice aforethought”.

Considering the legal definitions of murder, is Trump guilty of any degree of murder with regard to Covid-19.

Feb 7, 2020: Trump quotes to Bob Woodward early in the pandemic:

NOTE: The important distinction here is Trump is supposed to be listening to America’s best experts in epidemiology, not what “people think”.

CRITICAL POINT: It is at this point Donald Trump has quite clearly admitted to what amounts to murder based on the federal statutes for murder.  Trump already stated that Covid-19 is “more deadly than even your strenuous flus”.  This is clearly implicating that Donald Trump may be guilty of ‘First Degree Murder’, by definition. He knew it was deadly on Feb. 7, 2020.  The “malice aforethought” lies in the fact that he later said he “wanted to always play it down”, which he stated on Mar 19, 2020.  The code states: “or perpetrated from a premeditated design unlawfully and maliciously to effect the death of any human being other than him who is killed, is murder in the first degree.”  The premeditated design is Trump “wanted to always play it down” combined with Donald’s stated knowledge that Covid-19 is “more deadly that even your strenuous flus”. According to the code  “Any other murder is murder in the second degree.” And, if Trump can prove he does not understand the English language in court the evidence still implicates him in voluntary or involuntary manslaughter.

“We’ve taken the most aggressive actions to confront the coronavirus. They are the most aggressive taken by any country. And we’re the number-one travel destination anywhere in the world, yet we have far fewer cases of the disease than even countries with much less travel or a much smaller population,”

NOTE: February 29th, this was the day, which the U.S. officially reported its first coronavirus death.

IMPORTANT NOTE: Now Trump, even though he knew this was deadlier than the flu, suddenly reverses course and says “it’s not the flu. It’s vicious”.

The ironic part of the story is that the forensic analysis of Trump’s campaign indicates that if he did not gaslight the public and cause all these additional deaths…in other words if he chose to be a leader (which by the way is the President of the United States job, that is to lead) and protect the public from the virus thus saving tens of thousands of lives if not hundreds of thousands, then he quite likely would have won the election.

All he had to do was tell the truth, that it’s not like a common flu, and tell Americans to wear masks, practice social distancing and wash your hands regularly. Instead he talked about how it is like the flue and how poisoning yourself could cure you, which unfortunately some Americans took seriously, and yes that caused death as well. That’s Trumps fault though.

Probably the only way Trump can prove he is not guilty of some degree of murder would be if he claimed he is simply too dumb to understand English and that he simply did not know what he was talking about when he stated Covid-19 is “more deadly than even your strenuous flus”.

He essentially would have to claim he does not understand the definition of the word ‘deadly’.

Knowing Trump, he will play it off though. He might say ‘Well, I was joking.’ Or, I just meant that it might be like the flu and might kill some people’. No matter what, we can count on Donald Trump to make excuses and divert attention away from himself and blame others. That is his MO.

Another way to get out of it if this ever went to court, and yes, a class action by those hundreds of thousands of families that have lost loved one might very well be feasible here…, if Trump maintains, and can prove in court he is completely ignorant of what knowledge is, and if Donald can prove he is so incompetent that he does not understand what ‘knowing something’ is or means, then he is might be able to slither his way out of it. Otherwise he is ABSOLUTELY guilty of some degree, or multiple degrees, of murder.

Precedence for Impeachment dates back to the 14th century. The biggest fraud was Trumps move to hire DeJoy to destroy the high speed mailing machines and remove mailboxes around the country.

What is Gaslighting? Watch this short clip to find out.